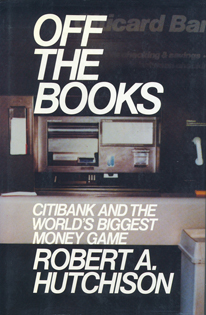 Off the Books is the inside story of the world’s biggest money game. Based on interviews with the players and documents compiled under the Freedom of Information Act, it is an explosive account of the brokers who control the security of the dollar.

The biggest player in this high-stakes, speculative operation was New York’s Citibank. Under the aggressive chairmanship of Walter Wriston, Citibank had become the largest commercial bank in the world. It was also the largest dealer in Eurocurrency deposits, the largest private lender and also the world’s largest foreign exchange dealer, an incredible powerhouse in the world of high finance.

Off the Books shows how, in this new age of electronic banking, money can be placed anywhere within seconds. Dollars, francs, marks, pounds and yen cross international time zones free of regulations. The regulators cannot reach beyond their own frontiers to control their own currency.
Off the Books takes the reader behind the scenes of this money game. Its existence might never have been disclosed publicly except for the persistence of a junior trader in Paris by the name of David Edwards, who accused the chief trader there of enriching himself at Citibank’s expense. Unable to prove his case, Edwards would later uncover evidence that Citibank encouraged its chief traders in Europe to “cook the books” in order to avoid local taxes and exchange controls.

The Edwards affair went to the bank’s directors, the SEC, and Congress. Off the Books details the confrontations and denials that have taken place in boardrooms, the SEC, the halls of Congress, plus a number of foreign countries. Up to June 1983, Citibank had paid $11.2 million in back taxes and penalties in four countries. Nobody in Washington felt impelled to act, partly because Edwards was not fully credible. The SEC’s head of enforcement, Stanley Sporkin did not agree.

He assigned his toughest enforcer, Thomson von Stein, to the case. Von Stein began digging and after many long hours of taking depositions and subpoenaing confidential documents he produced a complaint that accused Citibank of fraud and other offences.

Soon afterwards an Italian court found the bank’s two senior traders in Milan mentioned by Edwards as active parkers guilty in absentia of illegal exchange operations on a massive scale, and sentenced them each to a year in prison. In addition they were fined a million dollars each and ordered to pay court costs.

Citicorp was nothing if not arrogant. “If you make a mistake in your facts, we will tie you up in litigation for the rest of your life,” the bank’s general counsel Patrick Mulhern warned Hutchison during a meeting at the Citicorp headquarters.

Off the Books reveals that in 1984 Citibank traded $1.8 trillion worth of foreign currency. This amounted to $7.2 billion per day. These trades earned $258 million for the bank, or 30 percent of its net income.